They may not be front-runners in water management — there are more glowing examples across Chennai. But given the limiting factors, one of them being age, Aditya Ashwin Apartments and Anand Apartments on Dr Ranga Road have done well and achieved results, which were on display this monsoon

On the front yard of Aditya Ashwin Apartments on Dr. Ranga Road, a raintree has grown bridled, its gnarled buttress illustrating how it has made the most of the narrow strip of earth available to it. The tree is an apt symbol for the apartment which seems to be straining every tired old sinew to tackle modern civic challenges, despite being dreadfully rooted in the past. Its most recent laurel: It flaunted a dry driveway on the morning of December 31, following the previous day’s cloudburst.

The 37-flat apartment turned 35 this November, and as apartments go, anything fast approaching 40, suggests senior citizenry, not so much for the number of years that has passed as for the count of modern advantages that has been missed. While a majority of disadvantages can be tolerated, being plonked lower than younger neighbours who stand on raised foundations can be vexatious during the monsoon.

On this section of Dr Ranga Road, there is no stormwater drain, reveals CR Ashok, a resident of another apartment — Jains Aishwarya, a millennial among ageing apartments like Aditya Ashwin Apartments and Anand Apartments (42 years old).

“In Dr. Ranga Road, I think from Farida Stores junction towards Warren Road, there is a natural slope; I guess even if you put a stormwater drain connecting these two points, the water flow would still be blocked. That is my assumption. The moment you drain, outside my apartment, it would be dry, and water goes down to the end, and that it where it would accumulate. They try to divert the water to the nearest draining point,” explains Ashok

As an old apartment, Aditya could not duck waterlogging, especially where most other apartments stand on raised earth, notes Lakshmi Viswanathan, secretary of the residents association at Aditya Ashwin Apartments.

Though waterlogging was a problem for nearly three-and-half decades, it appeared niggling against the backdrop of something that is best described as a thorn in the flesh — “regulated water supply” from its borewell-driven water management system, stretching from 6 a.m. to noon or thereabouts.

While addressing the issue of restricted water-supply, the apartment serendipitously discovered the solution to water-logging.

Lakshmi recalls how in moments of lucidity, the water-supply situation begged the question: “When all other apartments could sustain a 24-hour water supply, why could not ours? What was wrong with our apartment?” The apartment had put up with the issue for 32 years without taking much of a concerted action.

She observes: “Every borewell we kept on digging was only going deeper and not yielding the results. They were only giving us muddy water. If one borewell went dry, the solution that was offered to us was sink another borewell.

“A lady who had come here as tenant — Karpagavalli — suggested that we meet Sekhar Raghavan from The Rain Centre. He demystified the concept of recharge wells for us, putting it across to us in the simplest of terms. ‘Whenever there is rain, all you are doing is collect the water in one place and sending it to the water table. You are basically helping increase the water table across the locality. Every two recharge wells in your apartment not only improves the water level or water quality in your area, but across the locality. And when you send water to the water table, the borewell will yield water,’ he told us.”

Ashok observes that Sekhar Raghavan, who has worked with a few other communities on the road as well, stipulated that they “start having recharge wells well within twenty feet, and start using rainwater.” The well-under-twenty-feet math factors in the level at which the water table is found in the locality.

Aditya Ashwin Apartments constructed six recharge wells — two at the front, another two at the rear, and the other two on the flanks — positioned the way the six-spot ground beetle wears its spots.

“There is 24-hour water supply now; and water quality — that is, its colour — has improved by 50 p.c. After rains, for a couple of weeks, the water is crystal clear,” reveals Lakshmi. “In exactly three to four hours after a heavy downpour, the water gets drained.”

Accommodating 52 flats, Anand Apartments has more heft than Aditya Ashwin Apartments. More age too — at 42 years, it is a clear super senior to Aditya. When it had two recharge wells constructed on its premises under Sekhar Raghavan’s guidance, it seemed to be taking a leaf out of its neighbour’s book.

There were clear parallels: It was guzzling water during rains, standing as it on lower ground. There was a nauseating colour and odour to the problem of stagnation. 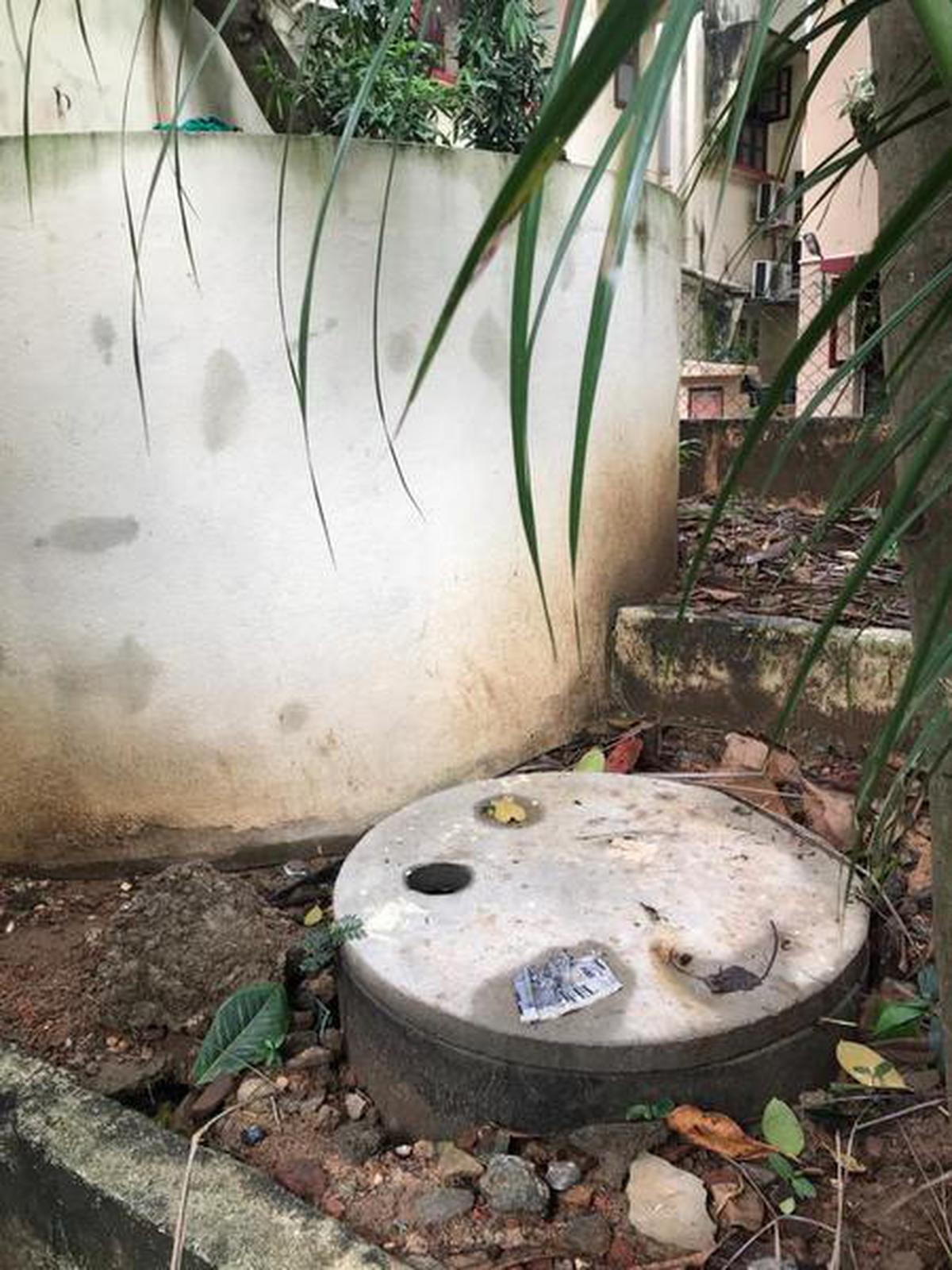 A recharge well next to an open well at Anand Apartments. Photo: Special Arrangement

“Whenever there was a drainage block, sewage and rainwater would get mixed,” reveals D Koil Raj, committee member of the residents’ association at Anand Apartments.

It had an advantage — two open wells — but their yield was not sufficient to meet the water needs of the 52 households.

“We were using Metro water. When there would be a shortfall, we would buy tanker water,” he points out.

Following the construction of two recharge wells close to the open wells, the maintenance bill reads different. They had arrived just in time to make the most of the spells of copious out-of-season rain during June-August and then during this north-east monsoon. The community seems to have finally had a taste of water self-sufficiency.

Just like Aditya Ashwin, this community had put an elaborate RWH system in place, but the groundwater runoffs remained to be utilised.

“We have connected pipes from the terrace to the open wells for rainwater harvesting. Recharge wells take the water from the floor faster than before and deposit it in the open wells, thereby ensuring much more of the rainwater is effectively used,” explains Koil Raj.