The All India Institute of Medical Sciences (AIIMS) Delhi on Thursday issued a fresh set of Standard operating procedures (SOP) for manual admission and discharge of patients. The development comes as the hospital continues to face server issues since Wednesday.

According to the guidelines, the admission, discharge and transfer of patients will be done manually at the hospital till E-Hospital is down.

It further said that the death or birth certificates are to be made manually on forms as per instruction from the working committee.

“Only urgent samples to be sent and that too with filled forms. Only urgent investigations are to be sent with forms as per instruction from the working committee,” it added.

Earlier on Wednesday, AIIMS reported a failure in its server. The server has been down since 7 am on Wednesday and the officials have been manually managing the OPD and sample collection.

The AIIMS said that it is taking measures to restore the digital services and is seeking support from Indian Computer Emergency Response Team (CERT-In) and National Informatics Centre (NIC).

According to the information given by AIIMS Delhi, “The server for National Informatics Centre’s eHospital being used at AIIMS, New Delhi was down due to which outpatient and inpatient digital hospital services including, smart lab, billing, report generation, appointment system etc., have been affected. All these services are running on manual mode currently.”

“National Informatics Centre (NIC) team working at AIIMS informed that this may be a ransomware attack which is being reported and will be investigated by appropriate law enforcement authorities. Measures are being taken to restore the digital services and support is being sought from Indian Computer Emergency Response Team (CERT-In) and National Informatics Centre (NIC),” AIIMS said in a statement.

“AIIMS and NIC will take due precaution to prevent such attacks in future. As of 7.30 pm, the hospital services are running on manual mode,” the statement hospital statement read.

“The staff has been managing the outpatient department (OPD) and sample collection manually. But those who do not have a Unique Health Identification are facing problems in this regard. The administration is also facing problems in admission and discharge of patients,” the statement stated. 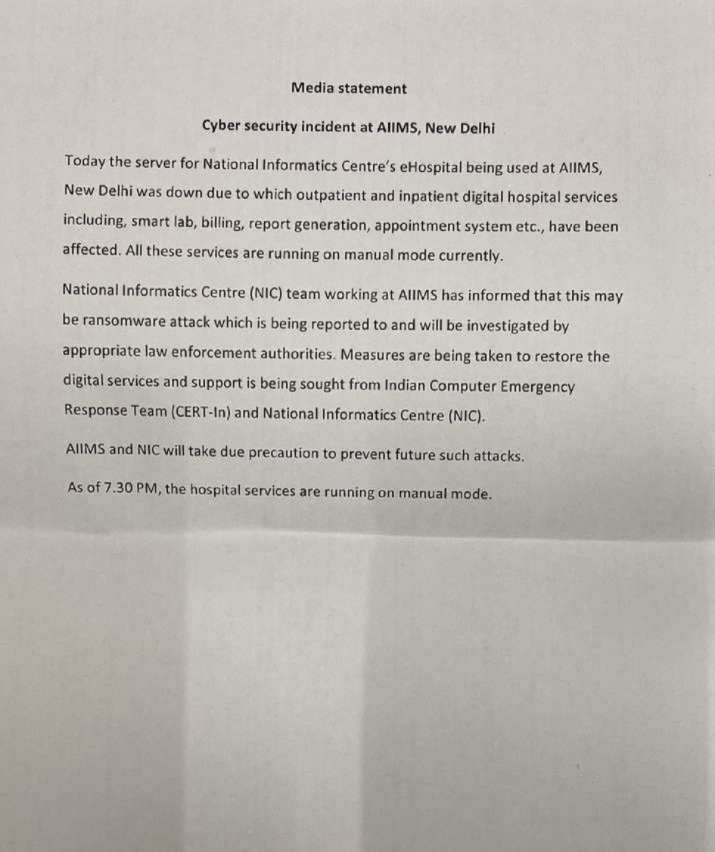 (With inputs from ANI)